The 14th Vasaloppet China took place on January 4, 2016 in Changchun, (2h by flight and 6h by train north of Beijing). It was the second year of this race in Worldloppet.

Vasaloppet China is a very special race, here I will mention some of its exceptional features: 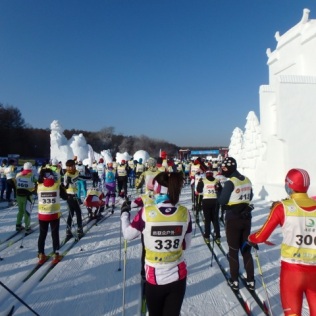 The pictures are by Minoru Matsuyama.

Worldloppet skiers know that the organization of the races is made by a local ski club or an ad hoc non-profit body. Not so in Vasaloppet China: the practical organization is done by a private Scandinavian, profit-making company. This is rather shocking and looks offending towards the Chinese, as if they were not able to organize this kind of events. The Chinese are good organizers: remember the remarkable Beijing Olympic Games; they will also host the 2022 Winter Olympics. We can wish for the Chinese that they will step by step take control and finally become independent. Then they can proudly announce the new name of the race. I propose: China Skimarathon.

A major inconvenience is that the race course is not open before the day before the race. And even on that day the majority of the skiers had the opportunity to explore only a few km of the course, because of the short time available in order to catch the only convenient return bus. When Vasaloppet Sweden’s boss visited the area some 16 years ago, he fell in love with it and later it was decided to organize an international race there. But now the race belongs to Worldloppet and must consider the needs and wishes of Worldloppet skiers. They are accustomed to skiing the whole course during the week preceding the race, and often during the whole ski season. In addition, the area has practically no snow and the course is covered by a 5 m wide avenue of artificial now, an ecological stupidity. The accommodation in Hotel Sheraton is very expensive (room rate 140 Euros + breakfast 20 Euros).There are reasonably priced hotels in Changchun, but they would require a daily shuttle service and the distances are long. For all these reasons we must conclude that Changchun is not a suitable place for a Wordloppet race and we urge the organizers to find a valid place. In China there are many suitable areas for XC skiing with natural snow. The 2022 Winter Olympics will be organized in a mountainous area near Beijing.

Almost 500 skiers participated in the 2016 events, about half of them foreigners. The mass start happened at 9.40. Due to the small number of participants we noticed no bottle-necks. Skiers of the 25 km race made one loop, 50 km skiers two. There was also a 2 km promotional race on flat terrain.

The 25 km course winds through forests with about one third on a lake. Climbs are mostly mild with only a couple of short herringbone parts. The descents are also mostly mild but in some places they end with a sharp turn which forces non-expert skiers to snow-plough to avoid gaining speed. Vasaloppet China’s descents should be improved to respect the rule that in popular long distance races the descents should be such that it is not necessary to brake. Since Sweden’s Vasaloppet is taken as a model, we can remind that in the Evertsberg descents skiers can confidently go full speed (up to 45 km/h) while feeling safe. The last 10 km of Vasaloppet China are flat.

The start/finish area is located within the area of the gigantic and masterful snow sculptures of the   Festival, competing in beauty with the Sapporo ice sculptures.

Some results of IAWLS members:

Other finishers (time not yet available)

Editorial note: This text is written by an IAWLS member. The opinions and views expressed here does not necessarily represent the views of the IAWLS Executive Committee.

This entry was posted in Race reports 2016. Bookmark the permalink.