On Sunday 11th March the 50th Engadin ski marathon was held in the spectacular Engadin Valley in Switzerland.  Many aspects of the race were organised to celebrate the 50 years of the event; in the St Moritz Elevator Gallery there was an art display of pictures from previous races, the 42km race course made a “50” groomed race circuit shape in the snow which would have looked brilliant from above and near Silvaplana there was a billboard display with children wearing a separate race bib for each year of the Engadin marathon.

Leading up to the race we were extremely fortunate to have a couple of days of sunny warm weather to explore the race trails up and down the valley.  We also skied the trail to Mortertasch Glacier which is a highly recommended diversion from training on the race course.

Bib pickup started on Thursday and was highly efficient at St Moritz Bad Health Centre where a large ski expo lined the sides of the cross-country ski trail.  The expo area became extremely busy on Saturday afternoon as some 20,000 skiers and friends converged on St Moritz.

On the Saturday afternoon there was a Worldloppet Masters’ Reception attended by about 80 people.  It was a great opportunity to socialise with like-minded skiers from many different nations over wine and nibbles and to recognise the efforts and persistence of new Worldloppet Masters. 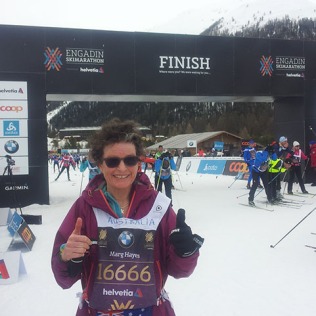 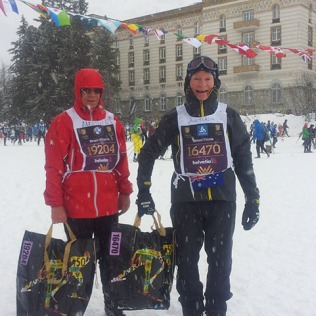 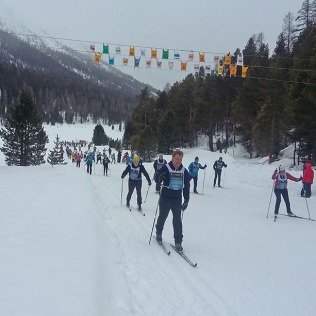 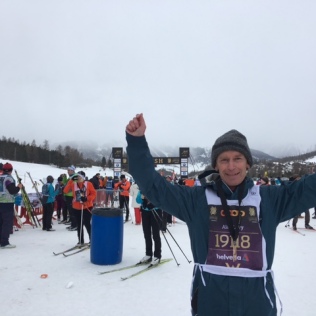 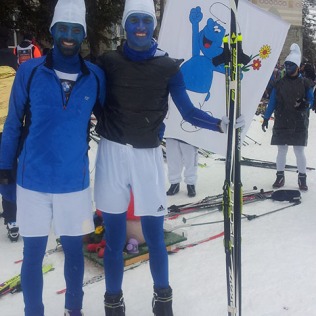 Catching the bus on race morning from St Moritz Bad was a time-consuming task as there were hundreds of skiers lined up at various transport pick up spots and only buses fully laden with skiers passing by.  I recommend allowing plenty of time ( 1 hours +) to wait for transport to the race start and be prepared to stand on a crowded bus for more than 30minutes.  As we alighted from the bus at the race start at Malorja it was lightly raining and skiers were dashing about trying to find plastic bags to use as temporary rain jackets and heading to the 2 large heated tents.  Fortunately, the rain was short-lived and very soon turned to wet snow for the next hour or so.  Our ski gloves were no sodden and cold.  By the time the race started it was mostly dry however remained cloudy and ominous for the rest of the day with the slower skiers experiencing more rain later in the day.  The temperature fluctuated around zero – 4 degrees for most of the day.

As we prepared our equipment at the race start, we noticed there were many skiers in fancy dress teams including a large group of smurfs, a collection of Mexicans, a few apes and ducks were spotted, a couple of pirates and an assortment of tutu costumes.  Some of the costumed racers also had some great music emitting from their outfit.  It all added to the race birthday theme.

At the start there was a significant number of well-labelled trucks, where skiers deposited their race bag with spare clothes that was transported to the finish. But it was a very busy area with surging crowds of bag and ski laden participants going in opposite directions and the occasional urgent skier pushing through.  The luxurious clothing bags that were handed out with the bibs were a great idea instead of the usual plastic bag that is thrown away after the event.  Skiers could take these sturdy colourful bags home and use them as reusable shopping bags as well as a souvenir of the race.

The race began with “Happy Birthday to Engadin” being played over the loud speakers.  The elite had a mass start but as there were some 22,000 citizen skiers following in the gold 42km race and silver 21km race awaiting in steel fenced ‘paddocks’ in an ideal start format.  This allowed everyone to commence skiing in a safe and relaxed manner.  Citizen skiers went into paddocks holding their skis and when your start time arrived you walked into the start zone and had 5 minutes to put your skis on and begin skiing.  Friendly helpers with devices to clear snow from ski boots were there assist. Your time began when you crossed the start line.

The first 10 kilometres or so was across frozen lakes, before reaching the first uphill where the pace slowed to a stop as skiers 6 wide herringboned up the steep incline. Then a short downhill and a little flat terrain and the course went right through the middle of the ski expo with lots of spectators and a brass band playing.  Next was the climb out of St Moritz where the progress ground to a snail’s pace, however enthusiastic spectators plied skiers with bananas, drinks and glucose tablets.  This really exhibited the local community’s support for the event.  Beyond the climb out St Moritz, the views were spectacular as some peaks tried to break through the cloud.  The course wound through a forested section before descending down the famous “Mattress Hill,” so named because the trees close to the race track are wrapped in orange mattresses to protect skiers who crash at speed weaving around the trees.  There is also a safe walking route option around this steep section as it does get very busy with skiers of varying skill levels trying to ski down the hill as fast as possible, resulting in some spectacular crashes at speed.  Hurtling down the hill beyond the trees and it’s a quick ski across the trains tracks before the final descent into Pontresina where the 21km half marathon finishes.

Now, I thought the trail might become less congested however this was not to be as the groomed trail narrowed to 2 skiers wide for a few kilometres with some more short sharp ups and downs.  Near Samedan the route flattened and widened, finally giving an opportunity for faster skiers to overtake safely before skiing the big 50 ‘shape’ in the snow.  The final third of the course was undulating and passed directly through several villages where spectators weren’t deterred by the threatening weather conditions and turned out in large groups to cheer weary skiers along.  The last few uphills I actually had to skate up, rather than herringboning as the crowds of skiers had thinned in the final rush to the finish line.  Finally a sharp left turn, down to cross the river and up to the finish line to join the thousands of skiers who had got there before me and were celebrating their success with drinks and food.

Having race bibs with my name printed on it, meant that on many occasions spectators and other skiers called out my name.  I also had an Australian flag on my bib which was a conversation point for other skiers.  A suggestion for race organisers would be to have the skiers’ first name and their country printed on bibs rather than first name and family name as is the current practise for this event.

The race was run in very good spirit with a lot of cooperation and politeness amongst skiers.  At many squeeze points especially uphills, or a narrowing of the track progress was halted yet the vast majority of skiers patiently waited their turn.  In one particular situation beyond Pontresina, as we waited, friendly conversation broke out amongst skiers and I convinced 2 swiss skiers to consider visiting Australia for the Kangaroo Hoppet, Australia’s Worldloppet ski race.

At the refreshment stations there many friendly volunteers who had trays of drinks, bananas, muesli bars and chocolate that was well-spaced, so there were lots of options to obtain a drink, food then another drink even though there were significant numbers of other skiers trying to do the same thing.  Well done!

Bands playing music at several locations throughout the race were a welcome distraction, creating a light-hearted party atmosphere.

All in all, the Engadin lived up to it’s reputation as a popular extremely enjoyable race on the Worldloppet calendar.  It contains a collection of flat sections, undulating sections, meadow sections and some more challenging climbs and descents.   Just remember to look up occasionally at the surrounding white peaks.

Thanks to Alan Levy for some of the photos.

This entry was posted in Race reports 2018. Bookmark the permalink.