A marathon 5 trains (12 hours) from Oberammergau saw us reach the Czech Republic.  Arriving in Bedrichov the Monday before the race we were shocked to see there wasn’t any snow on the ground at all. We immediately thought the Jiserska50 would be cancelled. Our hosts promised us it would snow that night, which it did.

The Jiserska50 race is a memorial race for a group of 15 local men from Bedrichov village, who whilst on a 1970 mountaineering expedition to Peru, died in a devasting earthquake that in total killed 70,000 people.  It was the 50th anniversary of these events so race organisers were keen for the Jiserska50 race to go ahead in whatever form possible to remember these locals. However, race organisers plans for an alternative race wasn’t very appealing for Jim and I.   A shorter race of loops would be held with only 400 skiers participating at any one time, so different time slots were available.   By the time we realised this (a text message from Dave but we were out skiing) and accessed the internet the only time slots available were 7.15pm or 9.30pm Friday night by headtorch. I didn’t mind skiing in the dark but with 399 other enthusiastic people (mostly men) on a tight course doing laps, that wasn’t appealing.  It also meant my 2 events, a 30km skate race and a 50km classic race would be held on the same day. Bruce,

Dave and Alan all got daylight time slots. 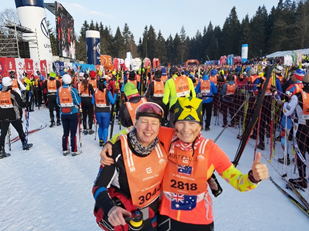 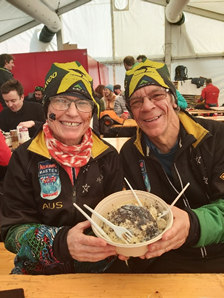 On Tuesday we skied in 10cms of fresh snow making our own tracks (no grooming) but by Wednesday there was 30cms of new snow with more snow falling and by Thursday the race organisers decided that with so much fresh snow the full races could be run as per usual. We were so pleased! The thin sections of the course were shovelled. We skied past the stone boulders memorial for the 15 mountaineers, their race bibs hanging above, knowing they would be happy the Jiserska50 was going ahead as per the program. Usually there is a Worldloppet Masters reception but this year Worldloppet Masters received a commemorative headband instead.

On Friday it was still snowing for the 30km (silver) freestyle race. With 1200 skiers on a narrow track it was very difficult to overtake anyone on the uphill sections (the first 10kms) so one had to be patient skiing in queues until either tired skiers stepped aside or the track widened. I was very happy to finish in a pretty good time of 2hrs 7mins especially considering the conditions. By Friday afternoon the sun shone and we relaxed in the warmth of the sun. 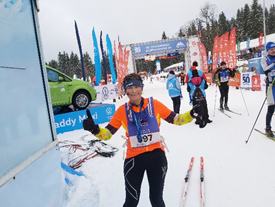 Saturday was picture perfect postcard weather for Bruce, Jim and Alan’s 25km (silver) classic race with fresh glistening white snow everywhere.  Not only was the weather perfect but the tracks were perfect too. The start was bedlam but apparently crowds thinned after a few kilometres. I skied out to cheer them on at a drink station midway round the course and was amazed that there were some 2,500 skiers in the 25km event as well as some 3,000 skiers in a shorter 10km race.  It was superb to see so many enthusiastic skiers participating in the multitude of events. 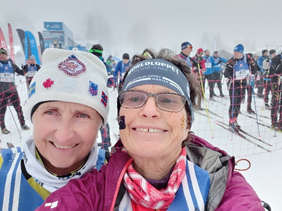 Sunday was the Jiserska50 main race, a 50km classic event with some 6,000 skiers. Skiers start in groups of about 800 people. Everyone rushes up the first hill, but as the track narrows the queues form.  I decided to just stay out of trouble and cruise along on the right hand side of the tracks knowing that after the first 10kms of hills the track widens a bit and the field spreads out a little so if I had any extra energy I could go faster then which is exactly what happened.  The fresh snow was still sticking to the trees making for beautiful scenes so I enjoyed the environment and the variety of terrain that the race goes through; forests, open plains, the small village of Jiserka with cheering spectators plus views over the plains of Poland.  Unfortunately, with so many skiers, so much new snow and temperatures around zero the classic tracks fell apart and got very wide so the legs shuddered and wobbled as the skis slid around in the wider and wider slots. I seemed to be skiing in crowds most of the way which means you have to concentrate more, in case the skier in front falls down or changes lanes unexpectedly.   Conditions were similar to Italy’s Marcialonga.   I was very pleased to finish in 4hrs 21minutes and earned a 2nd heavy, glass medal.   After finishing skiers are treated to a meal and drinks.  I chose the plum pudding which was absolutely huge. Other choices included a meat goulash or couscous with chicken & veges. It has to be the one of the best venues for tasty post-race food.  Well done to the Jiserska50 race organisers for having a back-up plan and being determined to run an event regardless of the conditions.

After the Jiserska50 we caught the bus to Prague and flew to Tallin. Arriving we received emails to say both the Tartu Maraton and Finlandia were both cancelled. We were devastated! To have travelled so far from Australia and to now have 3 race cancellations, we couldn’t believe it. Fortunately we were able to cancel our booked accommodation in Oteppa and Lahti so surfing the Internet we began to search for other opportunities as we didn’t fancy walking round in the rain for two weeks plus we wanted to maintain our ski fitness as Bruce, Jim and I still had 3 further Worldloppet countries to visit including being entered into 2 x 54km races in Norway. Alan and Dave headed back to OZ as planned but Bruce, Jim and I decided to take the opportunity to do something completely different and travelled to Levi in Finland’s Lapland. We had a brilliant week skiing the 240km of beautifully groomed cross country trails to interesting locations such as a reindeer farms, an elf farm and indulging in lots of cosy trailside cafes selling delicious freshly cooked pancakes and hot drinks.  We spoke to a few locals who all agreed that the Finlandia race organisers should have moved the Finlandia Worldloppet race to Lapland where the snow was plentiful. It would be hard to do at short notice but it’s certainly worth considering as a back-up plan if the snow is poor is future years.

Flying to Prague we met Bethan, an Aussie skiing friend on her International Worldloppet race debut. After spending the afternoon wandering around the old part of the city with it’s cobblestone traffic-free streets we travelled by bus and train via Liberec to reach Szklarska Poreba, Poland (132km – popn. 7000); a town with a mix of eccentric buildings very close to the border of Czech Republic.  It’s the nearest town to the Jakuszyce Cross Country Ski Center, the venue for the Polish Worldloppet race.  As the single carriage train pulled into the tiny station at Jakuszyce, a single platform in the middle of a snowfield, a surge of sodden Polish xc skiers boarded the train.  We were desperately hoping that the rain would turn to snow and….. overnight luckily this happened!

It was only a small snowfall but enough to cover most of the rocks and make the trees look very pretty.  We rejoiced and enjoyed the next 2 days skiing around the tracks in a mix of snowy, cloudy weather.  Out on the trails at Orle, there is a beautiful stone building, that was a former guesthouse and old glass making factory, now a café with open fire and serves delicious cheesecake and pancakes.  There was lots of other food but we couldn’t read the menu and nobody spoke English so we stuck to what we knew.  We observed that many of the Polish skiers were indulging in beer at 10.30am and noticed that it cost the same price as a hot chocolate, however we enjoyed our hot chocolate. Bethan and I met 2 young Ukraine army recruits who were most interested in the number of ski stickers on my skis.

Friday was the 30km freestyle race which Bruce classiced in snowy conditions.  I had tried to get a late entry but the number of skiers is capped at 700 and all the places were taken, so instead I met Bruce out on the course and skied with him a fair bit of the race cheering him on. It was great fun and Bruce did really well! (But had to hitchhike back to Szlarska Poreba as the race transport buses had ceased.)  That night there was a free dinner for Worldloppet Masters from all countries.  It was a friendly event where the Polish skiers invited us to sit with them.  Some didn’t speak English but others translated and it was a lot of fun. We had met some of the Polish skiers in China earlier this year.

Jim, Bethan and I skied Bieg Piastow’s 50km classic race on Saturday in very windy weather with a bit of snowfall falling too.  Fortunately, most of the race is in pine forests so we were protected from the worst of the windy weather.  The race was shortened to 42km because of the snow conditions but this was tough enough with quite a few uphills and poor classic tracks as the temperature was around zero without an overnight freeze.  I saw hardly any other female skiers and later Bethan checked the results and worked out that less than 10% of participants were female.  During the race at least 6 different men struck up conversations with me when they realised I was an Australian. (I wear a flag on my back and write Australia on my race bib). One of the men greeted me with “Holy s— are you from down under?” which was quite a surprise.  It certainly passed the time chatting to the friendly men from different countries who all spoke very good English.  One Polish man spoke 6 languages which I was in awe about.  It was a very friendly race.  This was Bethan’s first Worldloppet race outside of Australia; she did really well in challenging conditions.

Bruce was already entered in Sunday’s 25km classic race, Jim and I got late entries so had start numbers in 1580’s of 2,000 people.  Groups of 300 skiers or so were started at 3 minute intervals to spread the skiers out. To avoid the crowds, Bruce chose to be the last person over the start line but didn’t stay last for long. There were many less skilled skiers in the 25km race and I spent the whole race overtaking people.  It was quite tricky constantly changing lanes between the 3 classic tracks always looking for a gap between the slower skiers and checking no faster skiers were coming through. However I passed over 1,000 people and finished 547th  which was a great achievement. Bruce and Jim both had enjoyable races as well overtaking lots of other skiers. It was great to have so many enthusiastic Polish people out skiing the events in their countries biggest xc ski race.  This is a race that many normal, average Polish people feel comfortable participating in. We thoroughly enjoyed meeting so many Polish people and felt very welcomed and grateful that race organisers were determined to run an event regardless of the less than perfect conditions. Yes, there were some thin bits, some dirt and rock bits but we have had more challenging conditions in Poland before (2014) and survived. Thanks to the Bieg Piastow’s race organisers for doing such a superb job.

This entry was posted in Race reports 2020. Bookmark the permalink.